MY GIRLFRIEND AND I WANT TO JOIN THE MILE HIGH CLUB

Thank you for your interest in the Mile High Club.
Membership has its privileges: Besides receiving a handsome checkbook cover, you'll be among the people who've had sex one mile up in the air.
To get an idea of what that's like, imagine having sex, but one mile up in the air!
The club is always accepting new members, although there's been a recent shift in attitude toward deviant behavior on planes, even if you do remember to return your dick to the upright and Locked position during takeoff and Landing.
But if you are determined to amass some frequent-fucker miles, there are some things you should know.
"Of course, the bathroom remains the best place on commercial flights," says Diana Benson, a former flight attendant and the author of Mile High Club: First Class All the Way with the Rich and Famous.
(But be wary of the cart button, which is situated right at the knee and/or elbow level.)
She also tells us to "book a red-eye flight, so at Least you have the lighting on your side and other passengers sleeping." (And don't forget, when making your reservation, to request a special pervert meal.)
During the in-flight entertainment, when other passengers are deep in the clutches of Hollywood Homicide, is another good time.
"If it's a planned thing," says Benson, "then be smart. Bring some gifts along for the crew."
(Nobody doesn't like muffin baskets.) Benson recommends that you "get to know the flight attendants.... Even ask about their attitude toward Mile High Club activities."
In fact, that's what that button on your armrest is for.
When the flight attendant comes by, compliment the beverage selection, inquire about the weather conditions in Phoenix, and ask to see the cockpit while winking and poking your index finger through a hole you make with your opposing thumb and index finger.
I have recently performed oral sex on my girlfriend only twice, quickly, for about a couple of minutes each time.
I am afraid to swallow her "wetness."
Is it absolutely okay to swallow her excretion during oral sex? All right, son, as long as it was only twice, but next time I'll have to tell the dean.
To answer your question; If she doesn't have a sexually transmitted disease, you can forgo the spittoon.
Vaginal fluids are generally composed of proteins, bacteria, yeast, and lactic acid, among other things.
According to Debby Herbenick, a researcher at the Kinsey Institute for Research in Sex, Gender, and Reproduction, "Vaginal fluids do a lot of wonderful things, including lubricating the vagina and fighting off infections."
They're also--and this is interesting--the secret to a light and flaky piecrust.
And although the discharge is safe, Vanderbilt University psychiatrist Mitchell Parks cautions that--as with any liquid--mass quantities are to be avoided.
"At certain levels, a certain amount can do damage to your brain," which is probably why many fast-food restaurants have done away with free refills from vaginal-fluid dispensers.
My girlfriend and I have tried soft-swinging for two gears now.
It's a big turn-on for me and also for her.
What are your feelings on swinging? We all know the old saying "Whatever happens between four consenting adults in a Red Roof Inn is A-OK," and even though these things almost always work out smoothly with no lingering issues on either side, you're right to be concerned.
"Soft-swinging," or what swingers call watching other couples have sex and what James Caan calls "Thursday," is playing with fire.
As Tom McElvy, the three-hundred-pound publisher of the swinger-lifestyle magazine Tidewater Blue, explains, "Soft-swinging is a good way for the curious but timid to ease their way into swinging.
They may go on, or they may decide this is as much as [they] want and remain committed to each other."
While you two are enjoying yourselves now, one of you may soon resent being restricted to the shallow end of the pool and want to take off the floaties.
As sex therapist Dorothy Strauss tells us, one or both people in the couple will inevitably begin to experience feelings of jealousy or insecurity. Just like the kind you might feel when you see guys Like Tom soft-boning your girlfriend.
You and your girlfriend might want to consider taking up another hobby, Like windsurfing or breeding alpacas, or you're likely to find yourselves hard-single. 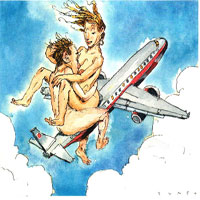