FEAR OF AIDS AMONG SWINGERS

Fear of aids among swingers Richard J. Jenks1 (1) Indiana University Southeast, USA Abstract A total of 88 swingers in the U.S. responded to a questionnaire dealing with AIDS.

Respondents were asked to indicate their level of fear of getting the HIV virus, how often they swing, how long they have swung, their reasons for (or not for) fearing AIDS, and if their sexual habits have changed because of the AIDS epidemic.

The main prediction was that they would deny their risk of getting AIDS.
This would be manifested in negative correlations between their fear level and both the time and frequency of swinging.
Results were mixed. A majority had some fear of getting AIDS; knowing someone who had died from AIDS led to more fear; and a majority said they had changed their sexual habits, but less than 7% had actually quit swinging. 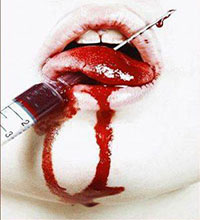