THE BEDROOM AND THE NEW ERA OF SWING

The bedroom and the new era of swing

Looks at the practice of swinging in which couples switch sexual partners.
Police raid of the Montreal swing club called L'Orage owned by Jean-Paul Labaye; Legal battle over the club and the charges against Labaye; His defense tactics; Estimation of the number of swingers; History of swingers; Public and religious opinion of the practice; Comments from specific swingers; Emotional consequences of the practice from Merv Mason; Profiles of average swingers

Charged with operating a common bawdy house, the owner of a private Montreal club says he and his clients have done no wrong

It's a sunny summer afternoon in Montreal and Jean-Paul Labaye is out on the patio of a downtown billiards dub drinking a beer and smoking a blue Gauloise cigarette. A few passersby recognize him and nod their greetings, and the waitress who drops off another round smiles and raises her arm as if to say "cheers." The 39-year-old has become something of a celebrity, it seems, having done more than 20 local, national and international TV interviews in the past year. "In the metro, on the streets, everywhere I go, people recognize me," Labaye tells Maclean's.

But Labaye is no movie star. In fact, the co-owner of the notorious L'Orage Club (the Storm) is more infamous than famous in Montreal. The soft-spoken, gap-toothed Parisian is at the forefront of a legal battle over "swinging," in which couples swap sexual partners. This week, a Montreal judge is expected to decide whether Labaye is guilty of running a common bawdy house at L'Orage--what the Criminal Code describes as a place "for the purpose of prostitution or the practice of acts of indecency." And his fight has piqued public interest in a trend portrayed in the 1969 movie Bob and Carol and Ted and Alice--one that had seemingly died with heightened fears over sexually transmitted diseases.

In a very public way, Labaye has changed that perception. For two years beginning in September, 1996, Labaye co-owned and managed L'Orage, a members-only swing club, where Montreal couples could meet other like-minded couples, and, if they chose, retreat to a private upstairs apartment to have sex. But on March 1, 1998, the dub was raided by police officers following a four-month undercover operation. Labaye says the raid was no surprise. "When I moved to Canada in 1992, I wondered why there weren't options for people who wanted a free lifestyle," he says. "I soon realized it was because of the laws, and I wanted to change these. I wanted to organize a club, knowing full well the police could one day come in."

Now, he is fighting back. Bernard Corbeil, one of two L'Orage lawyers, is citing freedom of association in the Charter of Rights and Freedoms as a defence. "If there is nothing illegal to being a swinger, it means that those people have the right to a place to swing," said Corbeil. Against Crown evidence that police found a woman having sex with five men in the private apartment above the club, Corbeil introduced into evidence legally available pornographic videos that depict a woman having sex with several men. "The court has the opportunity to establish community standards towards swing clubs," Corbeil said, adding: "I think society can tolerate swinging. Just look at the videotapes, the media and the entertainment we permit."

Labaye claims there are many who support his views. Since the raid, he says, membership at L'Orage has almost tripled to 1,000 couples. Because the original dub site was destroyed in a fire last fall, Labaye is organizing "parties" at private dubs and homes until he finds a new permanent location.

There is a market for such services. The North American Swing Club Association, an umbrella organization for swing dubs worldwide based in Anaheim, Calif., estimates there are three million swingers across North America. That number, says NASCA president Robert McGinley, has remained more or less the same since the early 1970s. In Canada, there are nearly two dozen swing dubs scattered from Dartmouth, N.S., to Prince George, B.C. "There are about 10,000 swingers in the Maritimes alone," said "Lantz," of Moncton, N.B., who asked not to be identified. He bases that figure on the circulation and proliferation of personal ads in his "lifestyle" publication, Maritime Connection.

Generally, established religions have condemned the practice. There is a depiction in the Bible of a wrathful God sending his avenging angels to earth to destroy the orgiastic sinners at Sodom and Gomorrah. Contemporary reaction is less dramatic, although the principles endure. "The appropriate way to manifest sexuality is in a committed, monogamous relationship," said Suzanne Scorsone, communications director for the Archdiocese of Toronto. Scorsone says fidelity bolsters a marriage, which in turn is good for families and society as a whole. "Swinging sets up people for greater risk," said Scorsone, who holds a doctorate in social anthropology. "The children become vulnerable to the consequences of unstable relationships."

Swingers interviewed by Maclean's say they chose the lifestyle as a way to satisfy their sexual needs while remaining emotionally faithful to their mates. They claim it is natural to be sexually attracted to other people and unnatural to be monogamous. Calgary psychologist Beth Hevda says that for some couples, swinging is a way to share their fantasies, while for others it is an alternative to the betrayal of infidelity. "Some people are just not monogamous," she says, "even when they remain completely committed to their primary partner." But Hevda warns that people should not feel forced to swing just to please the mate. "This has to be a free choice for both individuals," she said.

Retired Toronto psychotherapist Merv Mason agrees. He says there is great potential for jealousy between partners, and these feelings are heightened when one mate feels coerced. "There are lots of people who can't handle it," Mason said of swinging. "It gets particularly difficult when partners start going out separately. That's when things start breaking down."

But some couples say swinging has brought them closer to their partners. Karol, a 32-year-old small-business owner in rural Quebec, says since they starting swinging three years ago, she and her common-law spouse, Mike, are better able to communicate their feelings. "We don't hide our fantasies from ourselves or each other," said Karol, who asked that their last names not be used. She suggested the idea to Mike, who at first was hesitant. "I thought I was going to lose her, that this was her way of moving on," the 30-year-old recalls. "But for us, swinging is fun. We make love when we are alone together. But when we do it with other people, it is only sex."

According to Gould, most swingers are between 30 and 50, middle class and married for about 10 years before adopting the lifestyle. When L'Orage was raided, the 39 members found in the dub included a doctor, a lawyer, a secretary and an engineer. "These are average people, with average lives," said Gould. "What fascinates me are the people who have been doing it for years and still have good, stable marriages."

Swingers say they are dismayed at their image as callous wife-swappers or sexual deviants. Lantz, who swings with his wife of 15 years, told Maclean's he has been denied jobs, and he and his wife have been turned away from stores and restaurants, since their lifestyle inadvertently became public through an indiscreet personal ad they placed in a local newspaper. "In terms of public acceptance, I feel we are where homosexuals were 20 years ago," Lantz says.

Osgoode Hall associate law professor and criminal defence lawyer Alan Young sees it in another way. "It is dear that there is a huge market for the securing of sexual activity and there is little the government or the law enforcement institutions of Canada can do to stop this," said Young. "Maybe it's time for the government of Canada not to engage in the futile exercise of stopping these activities, and instead regulate them to ensure the dubs are safe, sanitary and there is no secondary crime associated with the clubs." Not surprisingly, Labaye agrees. It is time, he says, for sex between consenting couples to come out of the closet.

Copyright of Maclean's is the property of Rogers Media, Publishing Ltd.. The copyright in an individual article may be maintained by the author in certain cases. Content may not be copied or emailed to multiple sites or posted to a listserv without the copyright holder's express written permission. However, users may print, download, or email articles for individual use.
Source: Maclean's, 07/26/99, Vol. 112 Issue 30, p44, 2p 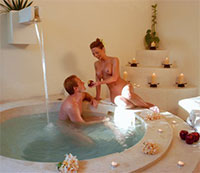